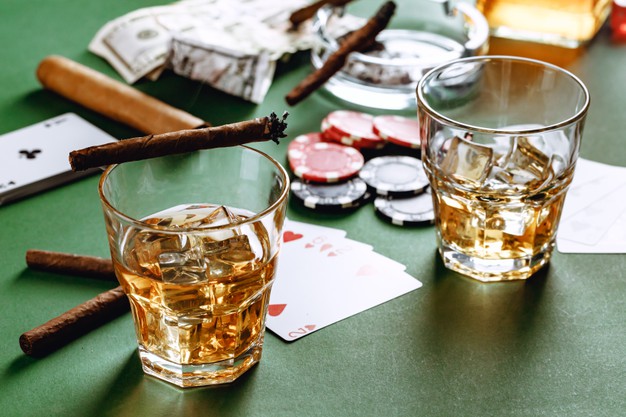 Online gambling has been an improvement since its inception in the 90s era. Today, whether it’s land-based or online, gambling has been considered a million-dollar industry. It has a long and rich history, it has its triumphs and failures.

Just like any other industry in the world, gambling has its fair share of strange occurrences. Not all gamblers are perfect, they are as human as we are, they make mistakes. Betting is the fundamental activity in gambling and it is still the core of gambling. Today, we will discuss the history of some of the most bizarre bets that have been recorded in the history of gambling.

In the year 2004, a very audacious man bet his whole life savings (his clothing included) on a single spin on a game of roulette. Ashley Revell put his 135,000 bets on a red and luckily won and doubled his money. This is the perfect example of the old saying, without risk there’s no reward.

There was a man called Andre Karpov who decided to bet his wife against Sergey Brodov in a game of poker and eventually lost. When his wife Tatiana found out about the deal, she immediately filed for divorce stating that she was devastated by his decision, betting to risk her away just to keep playing in the game. In a very strange twist, Tatiana eventually married Brodov stating that she is happy now much to Karpov’s remorse.

The Bet That Became Bestseller

Once upon a time in 1960, a man named Theodor Geisel won a bet against publisher Bob Cerf. Cerf bet for $5 that Geisel wouldn’t write a book using 50 words or less. The writer took the bet and wrote one of the classic children’s books of all time called Green Eggs and Ham under the pseudonym Dr. Seuss. Cerf never paid Geisel but the book became a bestseller.

The most bizarre bet on this list came from a man named Brian Zembic, he is known as a magician and a high-stakes gambler who will do anything unfamiliar to win. His feat includes living in a bathroom for a week and living in a box for a week. His most popular feat when in 1996 he wagered to keep breast implants for a year for $100,000. After he won, he eventually kept the breasts permanently as he has grown accustomed to them.

A Bet for a Bite

In the 2014 World Cup in Brazil, a gambling website in Norway was eventually devastated when 100 players won on a bet that Luis Suarez would bite a third person in a match. In 2010 and 2013, the Uruguayan player had already bitten two people.

The bookmaker has become complacent that the player has learned his lessons and will not do it for the third time. The bookmaker eventually lost when Suarez bit Giorgio Chiellini in 2014.

There was a Ugandan man who placed a bet against his neighbor in exchange for his home while his neighbor waged with his home, wife, and car. His wager involves him believing that Arsenal will beat Manchester United given the fact that Manchester is struggling with their new manager, David Moyes. Fortunately for the man who also wagered his wife, the Arsenal fan lost the bet and eventually was evicted with his three wives and five children.

Gambling has its fair share of strange bets, whether the stories are real or not we must take away some real-life lessons from these strange stories. As we all know, gambling in a casino singapore should be backed up with responsibility. Next time you will risk anything, make sure it is not your house, life savings, or your wife.